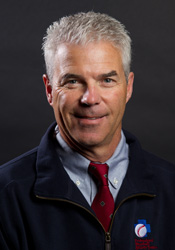 McKinney, Texas (Thursday, January 9, 2020) – The Taylor Hooton Foundation announced today that Jamie Reed (ATC) of the Texas Rangers, a recognized expert and veteran in the world of professional sports medicine, has joined its Board of Directors. The Taylor Hooton Foundation is widely acknowledged as the leader in the advocacy against the use of appearance and performance enhancing substances by the youth of America.

“We are very pleased to have Jamie join our distinguished Board of Directors and look forward to working with him to help further our message across the US, Canada and Latin America,” said Taylor Hooton Foundation President Donald Hooton Jr. “For years, Jamie has been an outspoken advocate of athletes achieving their goals the right way, through proper diet, exercise and training.  As a long-time leader of the Professional Baseball Athletic Trainers Society (PBATS), Jamie has been an active partner of THF as we deliver education programs to kids across America.  As we expand our messaging to include providing kids with the tools they need to compete fairly and safely, Jamie will be a huge asset.”

Prior to his major-league appointment in 1989, Reed spent seven seasons in the Orioles’ minor-league system with teams in Bluefield (Rookie League), Hagerstown (Class A), Charlotte (Class AA) and Rochester (Class AAA). He is a former American League assistant athletic trainer representative on the PBATS Executive Committee.  In 2001, he was selected by his peers as the new president of PBATS, and was re-elected to the position in 2003 and again in 2005. He also served on the Board as Immediate Past President until 2013.

“My passion the past 10 years has been protecting young athletes,” Reed said. “I have very much enjoyed sharing my experience in MLB with the parents and coaches of youth athletes and speak to the dangers of sports specialization and the benefits of proper conditioning, nutrition, and most importantly, keeping it fun for the kids. The Taylor Hooton Foundation has a very similar calling and I am thrilled to be closely associated with their group.”

To date, the Taylor Hooton Foundation has spoken to and educated well over one-million people across the U.S., Canada and Latin America thanks to its many supporters including primary sponsor, Major League Baseball. Additionally, the THF has put together an Advisory Board that consists of more than 40 active MLB players, including at least one representative from each of the 30 teams.  These men have proudly stepped forward to be role models to help the THF enlighten people to the truth about appearance and performance enhancing substances.