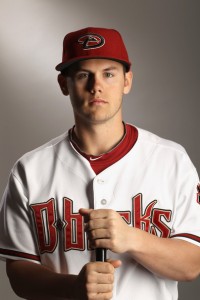 McKinney, Texas (Monday, April 24, 2017) – The Taylor Hooton Foundation announced today that Chris Owings of the Arizona Diamondbacks has joined its “Advisory Board” of active players from throughout Major League Baseball. The Taylor Hooton Foundation is widely acknowledged as the leader in the advocacy against appearance and performance enhancing drug use by the youth of America.

The D-backs infielder joins 37 other members of the Hooton Foundation’s “Advisory Board,” which now includes at least one player from 29 of the 30 major-league teams. The remaining team is working to secure a new member for the ’17 so that every MLB team will again be represented. Ownings replaces Brad Ziegler, who was a charter member of the “Advisory Board,” as the D-backs’ representative.

“It is so important that our young people have positive role models to look up to, especially when it comes to the topic of competing in sports and in life by doing things the right way,” said Taylor Hooton Foundation Founder and Executive Chair Don Hooton. “These major league athletes reached the pinnacle of their sport and, combined with our education campaign, are the most effective weapons we have in this national struggle. We are honored to have such a terrific group of major league players working with us.”

As members of the “Advisory Board” – formed in 2014 and fully endorsed by Major League Baseball – the players will participate in the THF’s 2017 public-service campaign, All Me. For the campaign, a print and video PSA featuring each of the Foundation’s “Advisory Board” members will be created – with images provided by THF national partner, Getty Images – and will be made available to each player’s respective team for its program/magazine and video boards for the ‘17 season. In addition, All-Me-themed print PSAs will run in Major League Baseball’s All-Star-Game, League-Championship-Series and World-Series programs.

In addition to their participation in the public-service-ad campaigns since 2015, members of the “Advisory Board” also take part in the THF’s educational activities in their local communities. Board members have also provided their input on the most-effective ways to educate North America’s young people about the dangers of anabolic steroids and other appearance and performance enhancing drugs.

To date, the Taylor Hooton Foundation has spoken to and educated more than one-million people. It has a Latin American outreach and travels throughout the Caribbean, speaking to thousands of RBI (Reviving Baseball in Inner Cities) athletes, coaches and parents in partnership with Major League Baseball. Additionally, the THF introduced a new eLearning program in 2014 – narrated by Bob Costas – to Little League Baseball that is offered to its one-million adult coaches and other volunteers.