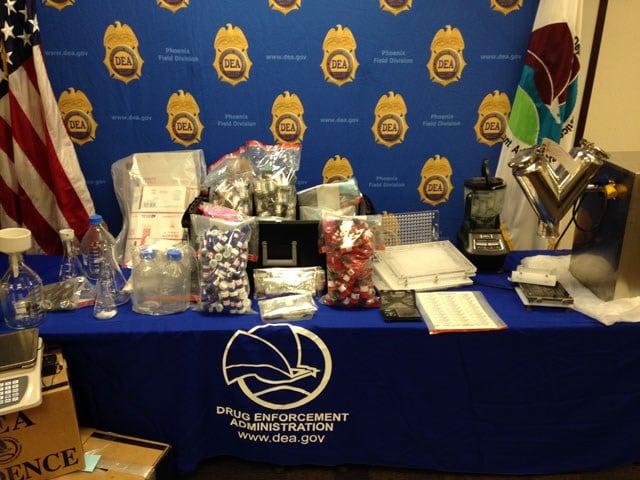 The DEA announced Tuesday that it recently shut down 16 underground steroid labs and made 90 arrests following 30 investigations in 20 states.

The agency said in a release that the series of investigations led by the DEA called “Operation Cyber Juice” was spurred by “actionable intelligence” provided by U.S. Anti-Doping Agency and the World Anti-Doping Agency.

Many of these drug operations received raw materials, finished steroids and manufacturing equipment from Chinese companies, the DEA said.

“There is great danger in buying steroids, chemicals, and other illicit products on the Internet,” the drug agency said in its statement. “Many companies operating illegally both in the United States, China, and elsewhere have no regard for product safety and mislabeling is common – both intentional and unintentional.

“Products are often misrepresented, and their safety is not at all guaranteed.  In addition, federal agents report that many of the underground steroid labs seized are extremely unsanitary, further illustrating the danger in buying these products illegally. For example, recent lab seizures uncovered huge amounts of raw materials being mixed in bathtubs and bathroom sinks.”

The DEA did not identify who had been arrested or what charges they face, but more information may become available over the next few weeks.

Here’s USADA chief executive officer Travis Tygart on Tuesday’s announcement: “In the global fight against dangerous performance-enhancing drugs, collaboration between anti-doping organizations and law enforcement is vital. This joint investigation again demonstrates that we can work together to identify and hold accountable underground steroid suppliers and users who are committing crimes and who may  also be cheating clean athletes and sport. The actions taken today will help to ensure that all athletes are safer and any young athletes who are pressured to use these drugs to win in sport are not preyed upon by illegal drug dealers.”

Here’s WADA director general David Howman on the DEA statement: “For a long time now, the World Anti-Doping Agency has been concerned about the illegal activity in some countries of underground production and trade of anabolic steroids and other performance-enhancing drugs.  These substances, either as full steroid products or in raw material form, are being produced in unsanitary ‘underground laboratories’ with no concern whatsoever given to the labeling of the products, nor to the health of the end user – quite often the athlete, and worryingly, very often young people. This problem is proliferating globally. It has become a public health issue and therefore requires an international solution through partnerships and collaboration. By partnering with USADA and the DEA in this major steroid operation, WADA has been able to prevent potentially harmful steroid substances from getting into the hands of athletes looking for an edge. This is a good example of anti-doping and law enforcement working well together to further their own efforts of reducing doping and protecting public health.”