“The use of performance-enhancing drugs like steroids is dangerous and it sends the wrong message that there are shortcuts to accomplishment. And that performance is more important than character,” President George W. Bush, 2004 State of the Union Address.

“King” Mo Lawal was not the first fighter to test positive for a banned substance in the state of Nevada. In all likelihood, assuming the Mayans weren’t right or the rapture doesn’t come, he won’t be the last either. Wherever you find athletes, you’ll find athletes looking to get the slightest edge, no matter the cost physically or financially.

Coincidentally, or perhaps not, on the same day the Nevada State Athletic Commission announcedÂ Lawal’s failed drug screening,Â the UFC had a steroid announcement of its own. The company will no longer meekly sit back and rely on state commissions to test their fighters for prohibited substances. 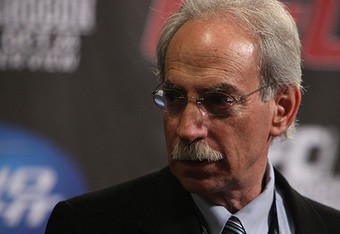 From this day forward, the UFC will test fighters before they ever enter the promotion. The UFC has hung a sign outside the Octagon and it’s written in giant letters. Perhaps in multiple languages. In crayon so even the slowest can comprehend:

“These are the best fighters in the world. Men of honor and discipline. Swollen juice monkeys need not apply.”

Okay. That wasn’t really what their press release said. The actual release was a bit more disciplined, but the message was the same:

“The health and safety of our athletes is our top priority,” UFC PresidentDana WhiteÂ said. “We’ve seen the issues performance-enhancing drugs have caused in other sports and we’re going to do everything we can to keep them out of the UFC and Strikeforce. Our athletes are already held to the highest testing standards in all sports by athletic commissions. Our new testing policy for performance-enhancing drugs only further shows how important it is to us to have our athletes competing on a level playing field.”

It’s a positive step forward for the UFC. Out-of-competition drug testing, perhaps even Dana White himself traveling to a random gym and making all the fighters take a piss test, would be even better.

But neither will be enough. Nothing ever will be. Athletes will spit in the face of risk and take the latest designer drugs no matter the obstacles. And that’s not just my opinion, friends. That’s science.

In the 1980s,Â researcher Bob GoldmanÂ asked a sampling of high-level athletes if they’d take a drug that would guarantee them a gold medal at the Olympics. The cost? They would be dead within five years. An astounding 52 percent admitted they would take the deadly drug. Results stayed consistent over the decade and into the 1990s. Athletes would literally be willing to die to win.

That’s how ingrained winning is in athletic culture. I’m not built that way. Chances are you aren’t either.

In a corresponding studyÂ focused on non-athletes, only two of 250 respondents would trade their lives for ultimate success in their fields. Athletes are different beasts, with combat sports stars being the most beastly of all.

Ultimately, athletes are going to use performance enhancers. When one gets caught, like Lawal was this month, the cheaters just get smarter. They learn how to time their cycles. They learn which designer drugs the tests can now spot. They stay one step ahead of the pee police.

The incentives to do just that are too strong, and we’re not talking just the little things like money and fame. The ultimate incentive of all is winning and sporting immortality. If an athlete will die to achieve success, how can a monetary fine or suspension stop him?