Taylor Hooton Foundation > Hoot’s Corner > General > UFC: Bonnar "didn't mean to cheat" (steroids)
UFC: Bonnar "didn't mean to cheat" (steroids)
Stephan Bonnar tested positive for a steroid called Drostanolone.Â  He admits using them to recover and thought they would be out of his system before he was tested for the fight.Â  But they weren’t.Â  So, he got busted . . . and punished. Hew wants his fans to be sympathetic, because he didn’t mean to cheat.Â  Somehow, I don’t feel sorry for him! Don

Stephan Bonnar never meant to cheat. That’s what he says now, five months after being busted for steroids, testing positive for Drostanolone after facing Anderson Silva. Even so, he acknowledges that he did take the banned performance-enhancing drug prior to accepting the Silva fight. Those two statements may sound like they contradict each other, but according to Bonnar, the purposes for his usage had nothing to do with his pro fighting career, which was then dormant, and everything to do with trying to fix his ailing knees. 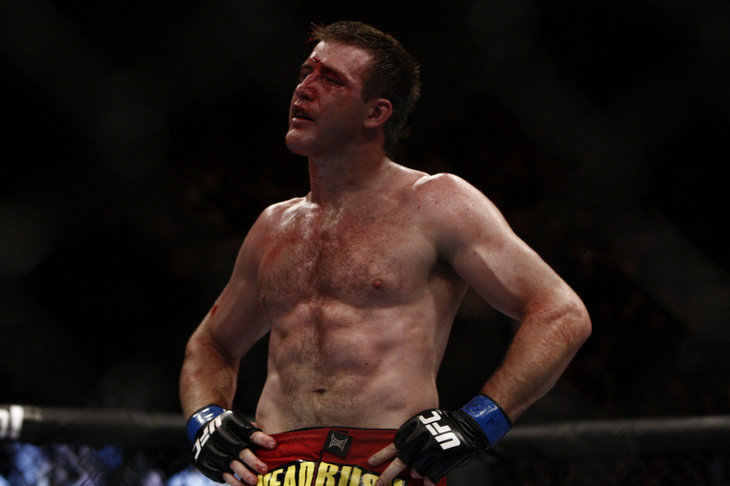 In his first public interview since the October 2012 match, Bonnar said on Monday’s edition of The MMA Hour that after being shelved for months and being advised to retire by UFC president Dana White, he had given up hope of closing out his career with a major fight. In that time, he’d undergone a pair of stem cell procedures on his injured knee. Two months after the second stem cell procedure, he decided he wanted to return to the gym to get in shape and help some of his friends train. In doing so, he made the decision to obtain some chemical assistance. “Believe it or not, there are some therapeutic uses to some of the banned substances,” he said. “Bottom line, I wanted to get my strength back. I was very weak. My body didn’t feel good, my joints didn’t feel good. That was my goal.” But then, out of the blue, the semi-retired fighter got the phone call he never thought was coming. After about 10 months without a fight, he was being asked to compete against the the sport’s pound-for-pound king, Anderson Silva. Faced with the opportunity, he looked at the calendar, and then the scale. He had three weeks to train, and 35 pounds to lose. And, he says, if you think he would intentionally take steroids when he had that much weight to lose to make the light-heavyweight division’s 205-pound limit, you are crazy.

“I’m not a stupid person,” he said. “Of course, I know I’m going to get tested. I got three weeks to train for the fight, and 35 pounds to lose, and you really think after that I’m going to take something that’s detectable for a month? That makes no sense. Absolutely none.”

Bonnar said that because he’d stopped taking the drug a few weeks before the call to fight Silva, he had been told by “every expert I talked to” that it would be out of his system by the time he faced Silva on Oct. 13. It wasn’t. Since then, his life has been difficult, at least on the professional side. While he and his wife Andrea recently welcomed their first child into the world, Bonnar said his happy announcement was met with many rude and angry messages from those who took the opportunity to scold him for what he’d done. It’s also changed his relationship with UFC bosses Dana White and Lorenzo Fertitta, who have previously said Bonnar would be in the UFC family for life. Since the positive test was announced, Bonnar hasn’t had a single conversation with them. “That was the hardest thing, too,” he said. “You know, there’s no way if I thought there was any possibility of it showing up, that I would have taken the fight. I finally get the opportunity I’ve been begging for in vain for so long. I thought I'd go out there and put on a better fight, but then stuff like this happens. It’s like I came to his house and took a s— on his carpet. It just kills me. I’m like, ‘Come on, Dana, give me this opportunity,’ and then I make him look like that. I'm really sorry.” Since then, Bonnar has mostly been laying low. He says his business interests have struggled because “people don’t want to do business with me. I’m a bad name.” He’s done some charity appearances, namely for the organization Garrett’s Fight, which provides special-needs athletes opportunities in the martial arts, but even that, he says, was overshadowed by his drug-test failure. So that’s why he’s been so quiet. “I feel the best thing for me to do is to respectfully piss off. It’s not to sit there and go, ‘Oh, come on Dana, give me another chance.’ I f—– up and I’ll put my tail between my legs and leave you guys alone for a while.” As far as what’s next for him, he doesn’t know. He continues to spend time with his family, and this Friday, he’ll make a rare personal appearance at Harrah’s in Lake Tahoe. And despite his two surgical procedures, he’s going to need another operation on his knee in the coming weeks. At 35 years old, he doesn’t think he’ll ever fight again. In other words, much of his life is currently out of his control. For an athlete whose named was tied closely to the UFC brand — an athlete who often represented the brand during public relations opportunities, personal appearances, community outreach and more — the unraveling of it all has been been painful to deal with. He knows at some point, things may change, but right now, the strained relationship is just another piece of his career that he may never fully mend. “That was really important to me, to be part of the UFC in ways other than fighting,” he said. “That's been hardest thing for me. I worked so hard over the years doing all those things to kind of give myself a home in the UFC outside of the actual fighting part of it, and I feel I ruined that.”