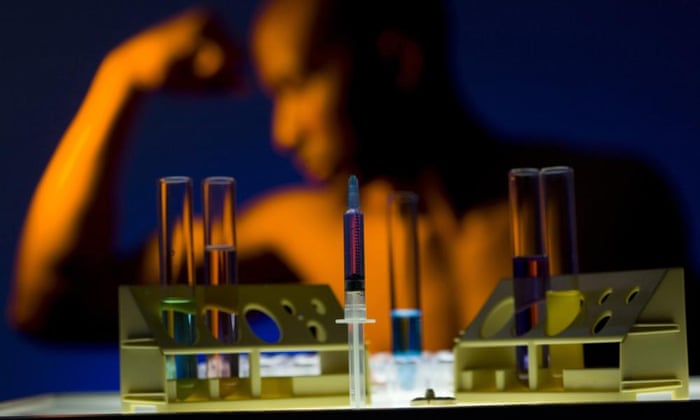 Adam started lifting weights when he was 16, doing so without any drugs for the first two years. But then a bodybuilding boss introduced him to steroids and his previously clean-living life – he did not drink or smoke – was transformed.

“I started getting a lot bigger, working on the doors, and I was getting more attention from girls,” he says. “I liked this lifestyle. I was taking steroids for six months at a time, and not taking any breaks, taking cocaine every weekend, always with different girls. That was my life, constantly, for about three years. I don’t even know how I’m still here today.”

Adam believes anabolic steroid use is endemic among teenage boys (picture posed by model). Photograph: DAJ/Getty Images Adam says the steroids changed his personality in other ways: “I had no criminal convictions. Then, in the space of about 12 months I got about 16, mainly connected to fighting. It was definitely the steroids that made me more aggressive. Your body, naturally, produces 7mg to 12mg of testosterone a day. I was putting in the region of 2,000mg to 3,000mg a week. All I wanted to do was be with different women, train and fight.

“It’s like being back in your teenage years. If you’re arguing with someone it’s a massive thing. You’re infatuated with the girl you’re with. You’re obsessive. It’s the same with your appearance. At my heaviest I was 18.5 stone, with 21 inch arms, but I didn’t think I was big. It was ridiculous.”

After a relationship broke down Adam stopped taking steroids, but then began again. It took a major health scare to make him stop for good. “I had high blood pressure and the doctor sent me to a specialist. They found I had an enlargement of the heart due to steroid abuse. They said: ‘If you don’t stop what you’re doing today, we’ll be diagnosing you with heart failure next month.’”

Now 31, Adam, based in the north of England, believes steroid use is endemic among teenage boys. “I can walk into a gym now and with the young lads it’s really obvious. With one or two it might be really good genetics, but you don’t get a group of seven or eight lads who look like they do without some other kind of help. It’s as simple as that.”