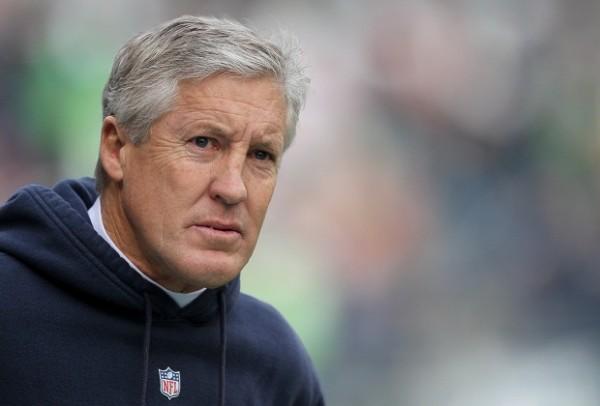 Contradictory to one of Russell Wilson’s most-used hashtags — #NoTimeToSleep — rest, recovery, and sleep have become major points of emphasis in the Seahawks’ overarching program. A huge part of Pete Carroll’s system is messaging, and you can often hear how his coaching staff’s focus on getting the proper amount of rest has sunk in with his players. Doug Baldwin mentions it in a presser. Jermaine Kearse references it in an interview. Richard Sherman talks about it in a column. Almost paradoxically, one of the most important parts of Seattle’s training program is managing the time spent doing absolutely nothing.

Pete Carroll’s focus on the benefits of sleep in recovery is the subject of a quick Q&A over at the Huffington Post today, and Ariana Huffington talked to Seahawks team psychologist Michael Gervais and Director of Player Health and Performance Sam Ramsden about Seattle’s goals in that area. (Huffington also wrote about the value of rest in her book Thrive, so it’s evidently an important factor for her personal philosophy).

“Fatigue and performance are intimately linked and sleep is one of the important variables to get right to help athletes sustain high effort and enthusiasm, for the long haul,” Gervais and Ramsden told her. “We learn from leading scientists about the best practices to maximize the effects of sleep on our organization. We schedule our training schedules and flight patterns to optimize the science of sleep. We spend a good amount of energy to educate athletes and coaches about the impact and effects of sleep. We also allocate resources to monitor sleep patterns for those who want to optimize their recovery process.”

Richard Sherman is one of about 20 players that bought into the system when they kicked it off in 2013, and after tracking his sleep patterns for half of that season, came to realize he was an “ace sleeper.” Sherman reiterated the importance of this emphasis on sleep when he penned a “love letter” to Pete Carroll just prior to Super Bowl 48.

“He’s not coaching in the Super Bowl because he’s a nice guy,” said Sherman. “He’s here because he’s pulling off the most unique philosophy in football. Think about it. We use a power running game and press coverage—the oldest of the old school. Yet we have specialized doctors who monitor us for concussion symptoms and wrist wear that helps the team track our sleep patterns. The same coach who shows us clips of Lester Hayes and Mike Haynes playing press-man 30 years ago wants to know if we’re getting our proper REM sleep (and, in case you’re wondering, the sleep science has paid off for several guys).”

But, let’s back up to where it started. One of the sources of inspiration for Ramsden’s sleep plan for the Seahawks was, interestingly enough, the 1990 novel The Bourne Ultimatum. As David Ebner wrote in his great column for the Vancouver Globe and Mail back in 2013, one line in that book really rang true. Robert Ludlum wrote, “‘Rest is a weapon,’ said Jason, repeating a phrase he had come to believe was a vital truth, vital for survival.”

This was an ah-ha moment.

“As an assassin, Bourne’s goal was to get more sleep than his enemies,” Ramsden told Ebner. “That really resonated with me. Society is learning this, too, how important sleep is and how dangerous sleep deprivation is. We’re teaching our players: Sleep is a weapon.”

It’s a key to top performance, science has shown, and according to studies done by Harvard, significant fatigue can have the same effects on a body as being drunk on alcohol. Imagine then how much fatigue can affect reaction time, processing speed, coordination, and fine motor skills, etc.

Prior to the 2013 season, wrote Ebner, Ramsden sought help from the Vancouver-based Fatigue Science, which had helped the Canucks with issues they had around their relatively extreme NHL travel schedule. Every Seahawk fan knows the effects of early morning east coast games — or, rather — know how much it used to affect Seattle’s players. This issue seems to mostly be a thing of the past — in part because Seattle’s roster is so stacked now — but likely also in part because of the Ramsden’s and the Seahawks’ plans for mitigating issues that cross-country flights, hotel beds, and travel have on circadian rhythms and performance.

“What we’ve done is taken a subjective art around fatigue management and human performance, and turned it into an objective science,” Fatigue Science founder Pat Byrne told Ebner back in 2013. The company has grown significantly since that time, in part because of the success that the Seahawks and Canucks have had based on their consulting. The Mariners jumped on board, as did a few dozen other pro organizations.

Naturally, the Seahawks have worked it into their holistic approach to managing their players’ well-being. The sleep focus works in concert with nutrition goals and psychological programs.

This was summed up perfectly in Alyssa Roenigk’s now-famous ESPN The Magazine piece from 2013. In it, she wrote that for the Seahawks,

The big idea is that happy players make for better players. Everyone in the facility, from coaches and players to personal assistants and valets, is expected to follow Carroll’s mantras regarding positivity of thought, words and actions. “Do your job better than it has ever been done before,” he tells them. Yelling and swearing are frowned upon, and every media interview with a player or coach ends with a thank-you to the reporter. And in a trial program entering its second year, a group of 15 to 20 players is undergoing Neurotopia brain-performance testing and has worked with Gervais to create status profiles — updated every week on an iPad app — of what’s going on in their lives, how much sleep they’re getting, their goals and how they’re dealing with stressors.

This is now old-hat for most Seahawks’ fans, but over the past two years, we’ve seen that something that Carroll and company are doing is working. We’ve seen two straight Super Bowl appearances, and a solid chance for a third in 2015. The cool part about all of this is that Carroll’s program is constantly growing and evolving, and he and his staff are still researching the latest technologies and studies that could help them.

Here’s the thing about the Seattle experiment: It’s only the beginning of what the Seahawks intend to be a total revamp of the way a football franchise approaches the physical and mental well-being of everyone in the organization. Team chef Mac McNabb feeds the players fruits and vegetables from local organic farms. He takes any leftovers to a nearby family-run farm to feed free-range chickens, which are raised specifically for the Seahawks cafeteria.

Ramsden and Gervais spend their spare time attending conferences, meeting with nutritionists and sleep experts, and, judging by the mound of boxes in Ramsden’s office, buying any new tech gadget that could be the next breakthrough in maximizing athletic performance. At the start of last season, Ramsden gathered data on most of the Seahawks, including blood and vision analyses and sleep and conditioning profiles. At practice, player movement is tracked via GPS so the team can monitor workloads. Ultimately, Ramsden would like to have players and coaches wear wristbands to track sleep habits and, when necessary, adjust practice schedules to maximize rest.

Chip Kelly and the Eagles are another “trailblazer” into this area, and as teams around the NFL continue pick up and develop “new agey” practices like the Seahawks have done, these systems will become more publicized and more common. It’s a copy-cat league. For now, though, it feels like Seattle’s still out there on the cutting edge and “trying to do it better than it’s ever been done before,” one of Pete Carroll’s standing orders. At the very least, it feels like they’re doing it better than anyone else is doing it right now, anyway.