It’s something of an open secret that the UFC holds its attending media in a sort of thrall during press events. Sometimes with angry outbursts, often with open condescension, and of course, with the threat of denying access to the sport’s biggest stars. Obviously there are a fair number of media members who seem fairly immune to these threats and publish as they please, but nonetheless,  the threat exists. 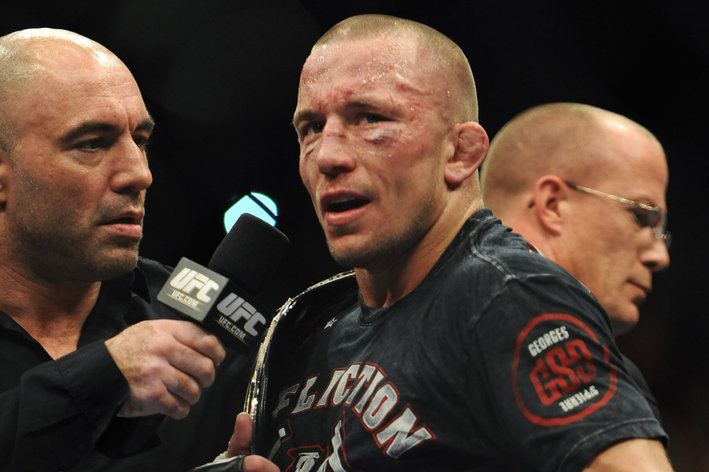 And it’s that threat, that former UFCwelterweight champion Georges St-Pierre is blaming for the lack of public support for his initiatives for stronger drug testing in MMA. He appeared recently on Off the Record with Michael Landsberg, and had some interesting things to say when asked exactly who he thought was using in MMA right now (I’ve highlighted key passages):

And the reason why I want to do this is because I think right now [this] is a big problem. And when I came up real quickly about this I had so many text messages about guys that are afraid to speak. Not even fighters, like reporters. They’re afraid to lose their credentials, but they tell me, “You’re doing the right thing. We support you.” And I had a talk with Lorenzo, and I think it’s going to be a good thing. There’s going to be a lot of change and it’s going to be all good for the sport. I think it’s the next step for us to reach even more people, to be more legitimate.

It’s interesting if true. There are certainly more than a few examples of the media being pressured by the UFC when it comes to topics that Zuffa isn’t necessarily keen on. Just recently Kevin Iole published his account of a “media lunch” with Dana White that largely seemed to consist of Dana screaming at reporters to point the finger at which of his fighters were dirty, with the intent of shaming them out of publishing work on steroid use in MMA. It doesn’t exactly reflect directly on the media, as to whether or not they would take White’s bluster to heart, but it certainly shows that the UFC is willing to try and exert influence whether it’s successful or not.