ESPN.com’s Rob Demovsky shared a statement from the NFL: 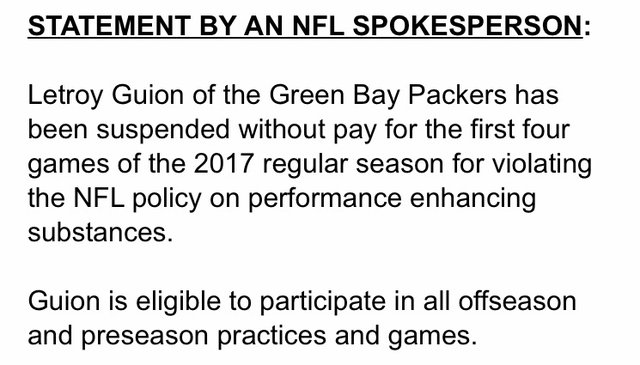 Have to think this is the end of the road for Guion with the #Packers. His play last year doesn’t warrant keeping him around until Week 5.

Guion started 15 games for the Packers in 2016, finishing the year with 30 combined tackles.

The 29-year-old did little to address what was a significant problem for Green Bay: run defense. The Packers ranked 22nd in run defense DVOA (defense-adjusted value over average), per Football Outsiders, and the defensive line was particularly vulnerable in short-yardage situations.

The unit ranked 30th in power success rate, which measures how a team performs with two or fewer yards to go on third and fourth downs, according to Football Outsiders.

Christian Ringo, a sixth-round draft pick who appeared in eight games last year, has the inside track on the starting nose tackle job for the first four games in 2017.

Should the Packers release Guion in the coming weeks, they may look for a more proven upgrade over Ringo.