Is the MMA providing fighters permission to use steroids?

Vitor Belfort was 33 years old when an Ultimate Fighting Championship doctor in Las Vegas — whose name has faded from his memory — diagnosed low testosterone as the cause for his feeling “tired and lethargic.” The fix for the two-time champion was a testosterone-replacement therapy regimen that continues to this day. Now 36, as he basks in a career rebirth that has him set for a spring UFC title fight, Belfort has emerged as the poster child for a practice anti-doping experts portray as, at worst, outright cheating and, at best, an unfair exploitation of a performance-enhancing-drug testing loophole: athletes competing while treated with synthetic testosterone. Exemptions for testosterone use — a substance banned in sports as a performance enhancer — are being handed out at exceedingly high rates in the ever-popular combat sport of mixed martial arts, with state athletic commissions routinely granting allowances based solely on low lab values and diagnoses of hypogonadism, an “Outside the Lines” investigation has found. A major known cause of acquired hypogonadism: prior use of anabolic steroids. MMA FIGHTERS WITH TRT EXEMPTIONS

• The International Olympic Committee did not issue a single testosterone exemption for the 2012 London Olympics, which featured 5,892 male athletes.

• The U.S. Anti-Doping Agency issued one testosterone exemption last year among the thousands of elite-level athletes under its jurisdiction.

• Major League Baseball has issued six exemptions to athletes over the past six seasons — an average of 1,200 players populate its rosters each season.

• National Football League officials say testosterone exemptions are “very rare” and only a “handful” have been issued since 1990. Nearly 2,000 players circulate through rosters each season.

• No pro boxer is known to have had an exemption issued through a state athletic commission, and Nevada officials said they have never even received an application.

“It’s a huge number,” said Dr. Don Catlin, the country’s leading anti-doping expert, of the MMA testosterone exemptions. “I am on the IOC committee that reviews [therapeutic-use exemptions for testosterone] requests. We essentially grant none. But in boxing and MMA there is no central control. There is no set of rules that everybody has to follow. “There is a set of rules for each [state athletic commission], but they are kind of Mickey Mouse rules. So the route to being able to take testosterone is wide open. … You go in and say ‘I have these symptoms.’ The doc says, ‘Oh yeah, you got low testosterone.’ You get a TUE.” Along with exemptions, several MMA fighters and officials also described to “Outside the Lines” widespread use of performance-enhancing substances in the sport. One top contender labeled PED use in the sport “rampant,” and a prominent state athletic commission chairman matter-of-factly acknowledged: “We got some doping going on in MMA.” A few state commissions where MMA fights occur less frequently acknowledged they don’t test for PEDs or don’t require fighters to reveal whether they are being treated with testosterone. Nor, apparently, does any state — including Nevada, arguably the most influential commission and a model for other regulators — require notice in a bout agreement of an individual having an exemption to use testosterone, so an opponent is left to learn through the rumor mill, if at all. Drug testing in MMA is confined to postfight by the state athletic commissions that test for performance-enhancing substances, with Nevada believed to be the only commission attempting out-of-competition testing. The UFC also does some of its own testing, although officials declined comment and little is known about the program. By comparison, major pro leagues such as the NFL and MLB — in part as a result of urging from Congress — engage in far more rigorous programs that include testing at the start of camp or spring training as well as year-round, random testing. “Outside the Lines” found the average age of the MMA fighters when granted their first testosterone exemption was 32 — the youngest 24. The majority enjoyed exemptions from multiple states, and, in some instances, fighters were found to have simply informed a commission they were on TRT rather than filing a formal application to compete while being treated with testosterone. U.S. and international anti-doping agencies insist therapeutic-use exemptions for testosterone should be rare and permitted only in dire medical cases such as testicular cancer and Hodgkin’s disease, as is the norm in most major sports. The international standard for an exemption specifically states that “low-normal” levels of a hormone isn’t justification for granting approval, also noting the same of isolated symptoms such as fatigue, slow recovery from exercise and decreased libido. Dr. Richard Auchus, a leading endocrinologist and University of Michigan professor of internal medicine, described the incidence of low testosterone or what is known as hypogonadism in healthy 30-year-olds as “vanishingly small” — or well less than 0.1 percent. “What people have to understand is a [testosterone exemption] is granted for a disease, not for a [low] lab value,” said Auchus, a consultant to USADA. “If you say idiopathic hypogonadotropic hypogonadism, meaning ‘I don’t know why you have it, but you have low testosterone production and there is nothing wrong with your testes’ — well, that can happen because you are taking exogenous androgen [steroids]. That doesn’t cut it.” The issue, said Catlin, is that synthetic testosterone remains one of the favorite drugs to enhance performance. Anti-doping leaders thus fear testosterone exemptions might be used by athletes to dope under the disguise of legitimate medical need. “It’s just a farce that is perpetuated in MMA,” said Catlin, who developed the test used to differentiate an individual’s natural testosterone from the synthetic version. “It is doping. It is cheating. It is both.”

‘I feel condemned right now. And I am doing everything legal’ 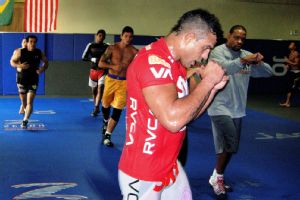 Mike Fish/ESPN.comVitor Belfort struggled in an interview to describe the cause of his low testosterone, other than to offer that he had felt rundown and tired.
Belfort referred questions regarding a more detailed explanation to medical professionals, including Pierce, medical director of the Ageless Forever clinic — which sits five miles west of the Las Vegas Strip. “Quite frankly, he has hypogonadism,” Pierce said, hesitating initially. “Now why is that caused? I don’t know. More than likely it is secondary to repetitive head trauma over the years.” Pierce issued a similar diagnosis about Mir on his TUE application to the Nevada commission, writing that he had a “history of head trauma … inherent nature of his chosen career path is head trauma. Patient has had at least one loss of consciousness from head trauma.” Pierce said the most reasonable cause of low testosterone in a combat athlete, as well as a football player, is repetitive head injury resulting in damage to the hypothalamus or pituitary in the brain, which affects the release of natural testosterone. But “Outside the Lines” found no boxers having been granted a testosterone exemption — in fact, Nevada officials said they had never received a request. And the NFL says it has granted a minuscule number over almost three decades. To Pierce’s point, researchers have documented pituitary dysfunction as result of head trauma in battered children, as well as victims of severe car accident and soldiers injured in war, but medical experts caution that in most cases individuals suffered an extreme injury, often accompanied by cerebral hemorrhage. As for MMA fighters, medical experts question the logic of allowing someone diagnosed as suffering head trauma to step back in an MMA octagon. It would figure there’d also be some signs of cognitive problems. At the very least, a full CAT scan should be done to rule out permanent damage or anything catastrophic, they said. Some experts further challenge the notion of head trauma triggering the shutdown or reduction of testosterone production in MMA fighters, noting that multiple hormones likely would be affected by damage to the hypothalamus or pituitary — not just the production of testosterone. Four endocrinologists and neuropathologists interviewed by “Outside the Lines” also said they were unaware of any controlled studies in which it had been shown head trauma in an athlete had shut down hormone production. The only definitive way to make such an observation is to autopsy brains after death, and an expert in the study of chronic traumatic encephalopathy in athletes indicated research to date had recorded no such hormone deficiencies. “There doesn’t appear to be any direct evidence from what I can see that that would be an answer for why they would have hypogonadism,” said Dr. Ronald Hamilton, a Pittsburgh-based neuropathologist who has reviewed brain autopsies of former NFL players. “This kind of [hormonal] change has not been noted in autopsies of CTE patients.”

‘It is obviously advantageous if you are on it’

Michael “The Count” Bisping probably knows best what a shot of testosterone can do, although by all accounts he hasn’t dabbled in the stuff himself. The British middleweight (24-5) has suffered the misfortune of having been in the octagon against three fighters benefiting from testosterone exemptions: Dan Henderson, Sonnen and Belfort, accomplished veterans in their mid to late 30s at the time. He lost to them all, done in twice by KO or TKO — the first of his career. “It is obviously advantageous if you are on it,” said Bisping, dropped by a Belfort leg kick in January 2013. “Look at somebody like Vitor — you know he failed a drug test [in 2006]. And one side effect of taking steroids is reduction of testosterone production. So now he is being rewarded for cheating in the past. You also have to understand that, as your body gets older, certain parts slow down a little. On the flip side of it, you also got more ring experience. “These older guys have had 30 or 40 professional fights, so they have more experience, plus they got the scientific supplementation. It is ridiculous. Of course, we’re also not trying to hit a ball with a bat or throw it in a hoop. We’re trying to knock our opponents out. So somebody is going to get hurt one day.” Indeed, the safety issue is dicey in a combat sport in which the endgame is inflicting enough bodily harm to send an opponent into submission — occasionally via a blow to the head. But whether naive or merely oblivious to the rumor mill, 34-year-old Bisping claims he was ignorant of his past opponents’ testosterone exemptions when he stepped in the octagon. His suspicions about Belfort perked up after their 2013 fight in Sao Paulo. “With Vitor Belfort, there was a whole cloud of secrecy regarding his drug test,” Bisping said. “A lot of people saying he failed it. So I was obviously very intrigued and I contacted the UFC and they said, ‘No, he hasn’t failed it, but he did have a TRT exemption certificate.”‘ Only a month after the fight, amid a firestorm of rumors, the UFC issued a statement revealing Belfort had been on a medically approved TRT regimen under the supervision of a Nevada physician. Coming two years after Belfort now acknowledges having begun TRT, the release said the regimen had been initiated after a diagnosis of “hypogonadism, or low testosterone.” Despite his current hardened stance, Bisping said he likely would not have balked at challenging Belfort even had he known of his testosterone supplementation. He said, though, that friends told him after the fight of having feared for his well-being because of the “sheer size” of Belfort. “The guy was so heavily muscled,” Bisping said. “At the time, you are a fighter and you believe you are going to win. So I never thought about it. Looking back, you can clearly see he was on something stronger than a frosty shake.” Nor is the fiery Brit the lone voice of suspicion in a sport in which doping has evolved through the years — as in many others — from hard-core steroids to growth hormone and designer drugs. Or what one UFC contender referred to collectively as “blue gasoline — the extra fuel.” The twist is that no other sport appears to have so freely handed out passes to TRT. http://espn.go.com/espn/otl/story/_/id/10500652/therapeutic-use-exemptions-testosterone-mma-outpace-other-sports-lines-finds