"When I saw the news on twitter last nightÂ [‘Cyborg’ Santos positive drug test], I felt a little like a ten year old whose parents have just admitted that Santa Claus doesn’t exist. A tiny bit disappointed, but mostly relieved that now we can all stop pretending." 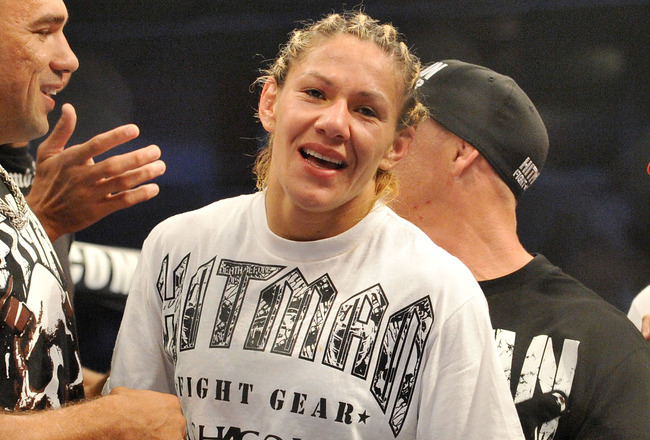 Similar to the thought process I highlighted in my piece on B.J. Penn,Â Kudos to B.J. Penn On His Stance On Steroids, she pulls no punches regarding steroid use inMMAÂ in her articleÂ Rosi Sexton On Cyborg: ‘Now We Can All Stop Pretending’Â at BloodyElbow.com:

"I’m not going to talk about Cyborg, though. Partly because we haven’t yet heard her side of the story, but also because she’s only the tip of a very large iceberg. It’s the issues that the story raises that I’m interested in."

The inference to me is very clear-MMA is rampant with PED and steroid use, and those who use (just as in any sport where use is prevalent) are simply finding ways around the ineffective testing procedures in place.

And, because of these ineffective testing procedures, athletes wanting to compete at the higher levels of the sportÂ haveÂ to use to stay competitive.

Sexton's depiction of the environment, and its consequence to fighters, is right on the money as she details the difference between MMA and other sports in that the combativeness of MMA can lead to a user smashing in the face of the non-user.

She continues to clarify the fight game dangers, stating that good fighters may work very hard to reach their level of expertise; however, the "advantage that performance enhancing drugs can give is significant and in some cases insurmountable."

And it is because of that above quote that so many athletes, who love their sport, are feeling the type of pressure that causes the have-to-use type of mentality.

Rosi continues to lay her feelings out there toward the end of her piece by drawing a line in the sand concerning illegal performance-enhancement drugs. She finishes her discussion leaving only two choices.

One,Â "we can decide that we want steroids out of the sport"Â and thus implement the kind of testing procedures,Â "gold standard drug policies,"Â that not only discourage use, but also close many of the currently existing loopholes.

She even suggests using WADA as a source to help create the type of testing environment that makes a difference.

Or two,Â "we can decide that all this is too much trouble"Â and just allow their use within our sport taking theÂ "stigma of 'cheating'"Â out of the mix.

So, which way does Rosi Sexton, a top 10 MMA contender, lean?

"As a fighter I’ve never used steroids, and I don’t want to start now. Of the two options, I’d prefer to see an improved standard of testing. But the important thing for the sport and everyone involved in it, is that we come clean about it one way or the other."

I sure love the character and integrity in that last statement.You go girl!

And me? I am pretty sure if you frequent my blog at all you already know the answer to that.

However, I would like to finish this piece with a couple of questions-questions based on one other quote Rosi made regarding that second choice mentioned above (allowing the use of steroids).

"The point is often made that MMA is more a business than a sport."

Is that how participants in MMA-or any sport-see themselves and their sport? Only as a business, not as a sport? Is that how they want fans to think of them?

If that be the case, then that raises another question. If their sport is just a business rather than a sport, then do they become merely entertainers rather than real athletes?

Me, I'd rather be an athlete-one who works towardÂ realÂ athletic accomplishment, rather than the pretense of such through the use of steroids and illegal performance-enhancing drugs and practices.