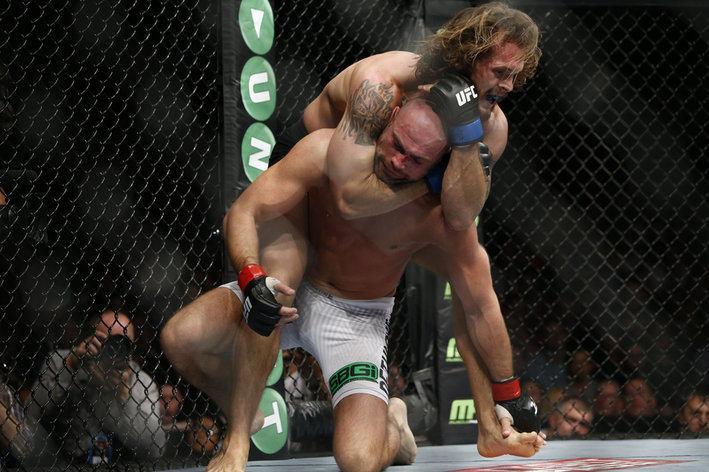 UFC middleweight Mike King has been handed a nine-month suspension due to a positive test for the anabolic steroid nandrolone following his UFC Fight Night Dublin loss to Cathal Pendred, promotion officials announced on Wednesday.

A contestant on TUF 19, King battered Pendred for one round before succumbing to a thrilling second-round comeback at the event, which took place July 19, 2014 at The O2 in Dublin, Ireland and aired live on UFC Fight Pass.

Both fighters were initially awarded $50,000 ‘Fight of the Night’ bonuses, however King’s half of the bonus has now been forfeited as a result of his failed drug test, and King has subsequently been released from his contract.

“The UFC has a strict, consistent policy against the use of any illegal and/or performance-enhancing drugs, stimulants or masking agents by our athletes,” UFC officials said in a statement on Wednesday. “[King] agreed to serve a 9-month suspension retroactive to the event and must pass a drug test before receiving clearance to compete again. He will forfeit his $50,000 Fight of the Night bonus.”

King released the following statement to MMAFighting.com on Wednesday:

Following my bout against Cathal Pendred at UFC Fight Night Dublin: McGregor vs. Brandao on July 19, 2014 I tested positive for the banned substance Nandrolone.

The consequences for my conduct are truly significant: the life changing $50,000 Fight of The Night bonus I was awarded has been taken away, I have been informed that my UFC promotional agreement is being terminated, I have been placed on a nine month suspension, and I have publicly humiliated myself. I accept full responsibility for my actions and decisions and make no excuses.

I want to apologize to my opponent and friend Cathal Pendred, the UFC, Dana White, Lorenzo Fertitta, coaches, team mates, management, friends, family, and most importantly my fans.

I believe in the power of redemption and second chances. I will work tirelessly to prove I am a trustworthy person who deserves the honor of competing at the highest level in the sport I love.