Nearly three years removed from his interview with Bob Costas where he admitted using steroids during his playing career, former St. Louis Cardinals slugger and new Los Angeles Dodgers hitting coach Mark McGwire is now adamantly advising current and future baseball players who may already be altering their bodies and performance with PEDS, or are considering doing so, to “use your head” and “run away from it”. 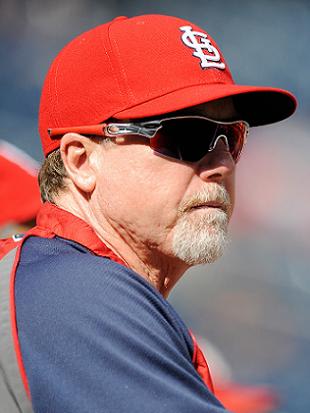 McGwire made the comments during a recent interview with Fox Sports Radio. The folks over at Sports Radio Interviews later posted the full transcript which you can read here.

The PED discussion started with McGwire being asked about the prevalence in the game today, which he responded by saying:

“I don’t know. I’ve never heard anybody talk about it. I’m a great example of what happens when, I mean I owned up to it. Why anybody would even think about doing that today I have no idea. I’m sad for these guys but then again you have to look at Major League Baseball and what they have done to crack down on it, it’s been fantastic for the game of baseball and you just have to move on from it. I don’t know what the percentage is, I think it’s a lot lower but as far as I know nobody ever talks about it. You just have to move on and if people get caught then they get caught. That’s why they have the testing and it’s gotten stronger over the years and you have to give kudos to the MLB for doing what they’re doing, I think it’s great.”

The conversation then transitions to what McGwire would tell any hitter who asked his advice on PEDs:

“Yeah, don’t do it. Use your head. It’s a mistake that I have to live with for the rest of my life. I have to deal with never, ever getting into the Hall-of-Fame. I totally understand and totally respect their opinion and I will never, ever push it. That is the way it’s going to be and I can live with that. One of the hardest things I had to do this year was sit down with my nine and ten year old boys and tell them what dad did. That was a really hard thing to do but I did it. They understood as much as a nine or ten year old could. It’s just something, if any ball player ever came up to me, run away from it. It’s not good. Run away from it.”

Say what you will about McGwire’s past - everybody has and will continue to do so - but you have to give him credit for not only coming clean, but again making it a point to denounce his actions. As Mark Whicker of the Orange County Register pointed out, by doing so McGwire continues to rehab his reputation and credibility, and in the process has reinvented himself as a teacher and mentor within the game. Something he’s done well enough that the Dodgers targeted him to fill their hitting coach vacancy and the Cardinals didn’t want to lose him.

That’s not to mention that fact that his message will be heard, and in many cases will be heeded by those listening, which is really all that matters. And sure, the McGwire family may have benefited financially from his choices, but in many cases it’s true that money doesn’t buy happiness, and it’s clear McGwire was not a happy person during that time in his life. Now that it’s out in the open, he has a credible voice on the topic and he’s fully involved in the game he loves, it’s turning in to a good thing for many different people.