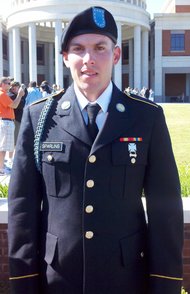 Pronounced Jacked, the powder contains a stimulant that marketers say increases strength, speed and endurance. At VitaminShoppe.com, where Jack3d is also sold, a reviewer boasts, "My muscles have gained mass like never before."

Yet, last April, federal health regulators issued a warning that the stimulant - called dimethylamylamine, or DMAA - frequently raises blood pressure and heart rate, and could lead to heart attacks. In December 2011, after the deaths of two soldiers who had used Jack3d, the Defense Department removed all products containing DMAA from stores on military bases, including more than 100 GNC shops.

Now the parents of Michael L. Sparling, one of the soldiers who died, have filed a wrongful-death lawsuit against USPlabs, the developer and marketer of Jack3d, and GNC, the store where he bought it. The suit, filed on Wednesday in state court in San Diego, claims that the companies deceptively marketed Jack3d as safe and effective while not warning consumers about its potential health risks. It seeks unspecified punitive damages.

In an e-mail, Laura Brophy, a spokeswoman for GNC, which is set to announce its earnings Thursday morning, said the company did not comment on pending litigation. Representatives of USPlabs and the Vitamin Shoppe did not immediately respond to e-mail or return telephone calls seeking comment.

The Sparling case highlights gaps in product safety and regulatory oversight of the $30 billion dietary supplement industry in the United States, some supplement researchers say.

Under federal law, supplements are defined as natural products that contain only dietary ingredients. Yet the pharmaceutical company Eli Lilly originally developed the stimulant now used in Jack3d and other workout boosters as an inhaled drug for nasal congestion in the 1940s.

With prevalent chains like GNC lending their reputations and reach to such products, the researchers fault the retailers as much as manufacturers for promoting what they see as questionable supplements.

"It's a pharmaceutical-grade product which is being directly introduced into the supplement marketplace with absolutely no regulatory oversight," said Dr. Pieter Cohen, an assistant professor of medicine at Harvard Medical School who has studied dietary supplements.

In the medical literature, DMAA has often been described as a synthetic stimulant similar to amphetamines that can constrict blood vessels, raise blood pressure and heart rate, potentially increasing the risk of heart attacks and strokes. In 2005, supplement makers began to market the substance in workout and weight-loss products, often combining it with caffeine, which may enhance the stimulant's effects. Products like Jack3d and OxyElite Pro, which USPlabs also markets, became popular among fitness buffs as part of their pre-workout routine.

Although USPlabs now makes a new version of Jack3d - called Jack3d Micro - without DMAA, and the products are no longer sold on military bases, the original Jack3d remains widely available at some stores and Web sites. GNC.com said that Jack3d "produces an intense sensation of drive, focus, energy, motivation and awareness." Last week, a reporter bought the original version of Jack3d at a GNC outlet in Midtown Manhattan.

Â But a study commissioned by the United States military after the two soldiers died raised red flags about the safety of DMAA products.

Â "DMAA in combination with other ingredients may be associated with significant consequences," a team of military, sports and supplement researchers wrote in case reports about the deaths of the two soldiers that was published last December in Military Medicine, the journal of the Society of Federal Health Professionals. The researchers added, "DMAA continues to be available in dietary supplements despite the lack of evidence that it qualifies as a dietary ingredient."

The Food and Drug Administration also issued warning letters to 10 marketers of the workout boosters, but critics charge that the agency has been slow to take definitive action against the products. Health regulators in at least seven other countries, including Britain, Sweden, Denmark, Finland, Canada, New Zealand and Australia, have effectively banned supplements containing DMAA.

Last month, a coroner in Britain cited the stimulant in the death of Claire Squires, 30, who took Jack3d before running the London Marathon last year, collapsed late in the race and died. DMAA "on the balance of probabilities, and in combination with extreme physical exertion, caused cardiac failure which resulted in her death," the coroner wrote in his report.

The F.D.A. warnings sent to companies last spring said that the agency had no evidence that DMAA qualified as a dietary ingredient or that it was safe. Health professionals asked why, nearly a year after the warnings, retailers continued to sell products containing the stimulant.

"The F.D.A.'s warning process may do little to nothing to stem the significant public health risk posed by this potentially dangerous ingredient," Philip J. Gregory, an associate professor at the School of Pharmacy and Health Professions at Creighton University in Omaha, Neb., wrote in a research letter last December in Archives of Internal Medicine.

The F.D.A. has received 60 reports of health problems in people who had ingested products containing DMAA, including reports of at least two deaths. Federal regulators cautioned that the reports did not prove the products themselves caused the health problems. Even so, they said they had safety concerns.

Â "It was a drug. That certainly calls into question whether it even fits in the supplement space," Daniel Fabricant, the director of the F.D.A.'s division of dietary supplement programs, said in a telephone interview last week. "We continue to send warning letters."

Steve Mister, the chief executive of the Council for Responsible Nutrition, a trade group, said the agency had been too slow to issue a final decision about DMAA.

"It is incumbent upon the F.D.A. to make a decision as to whether it is a legitimate and safe dietary ingredient," he said.

The wrongful-death lawsuit filed Wednesday adds to the legal battles being waged by USPlabs. In December, the company paid $2 million to settle a false-advertising lawsuit filed against it in California state court by consumers who bought Jack3d and OxyElite Pro. As part of the settlement, USPlabs did not admit wrongdoing, but agreed to change the labeling to make warning statements on the products larger and easier to understand.

Â The company has also gone on the legal offensive, using the courts in an attempt to defend Jack3d's reputation. Last October, USPlabs filed a defamation lawsuit against the owner of a supplements store in Reno, Nev., who gave a television interview about Jack3d as part of a consumer safety report on a local news broadcast. Philip Tracy, the owner of Max Muscle of Reno, described Jack3d as an "amphetaminelike compound" that "speeds up your heart rate" and could "possibly" cause death. A judge dismissed the lawsuit, which was filed in federal court in Dallas, for lack of jurisdiction.

Â The lawsuit filed by Mr. Sparling's parents said that on the morning of June 1, 2011, Mr. Sparling took the recommended dose of Jack3d after buying it at a GNC store at Fort Bliss in El Paso. During a moderate workout with his unit - a short run interspersed with lunges up a small hill - Mr. Sparling, 22, collapsed. He died at a hospital several hours later of respiratory failure and cardiac arrest.Â Anne Andrews, a lawyer for Mr. Sparling's parents, said it was appalling that GNC continued to sell Jack3d.

Â "Jack3d is a product with well-established dangers, and the F.D.A. and medical community have made that abundantly clear," Ms. Andrews said. "GNC has chosen financial gain over the safety of the consumer."