Taylor Hooton Foundation > Hoot’s Corner > General > Female MMA fighters using steroids
Female MMA fighters using steroids
“Working hard in the gym won’t give a woman muscles like that any more than eating worms and flapping your arms will make you fly.” Â This statement made by Rosi Sexton of the women’s MMA is a recognition that when you see female fighters with muscles, what you are really seeing are active steroid users. Ms. Sexton reveals that “Tougher penalties alone won’t do. The testing procedures used in MMA are (on the whole) outdated enough that fighters are confident that with a little knowledge they can avoid getting caught.” She suggests that the MMA either needs to get serious about tackling drug abuse in sports or just go ahead and let everyone use drugs to compete. I think you all know where we stand . . . . GET DRUGS OUT OF SPORT! Don

When I saw the news on twitter last night, I felt a little like a ten year old whose parents have just admitted that Santa Claus doesn’t exist. A tiny bit disappointed, but mostly relieved that now we can all stop pretending.

I’m not going to talk about Cyborg, though. Partly because we haven’t yet heard her side of the story, but also because she’s only the tip of a very large iceberg. It’s the issues that the story raises that I’m interested in.

To people within MMA, it usually comes as no surprise when a fighter tests positive for steroids. It’s generally accepted that there are a lot of fighters out there who use banned performance enhancing drugs (estimates range from “a significant minority” to “almost all”), but most of the time they get past the limited testing that is put in place either by timing their steroid use carefully, using masking agents or both. It’s only when someone makes a mistake that they get caught.

Because of this, performance enhancing drugs are often seen as a non-issue. “They’re all taking it anyway, so what’s the problem?”.

The problem is that this is a combat sport. In most sports, the consequences of failure might be measured in pride, status or money. In MMA, you add physical damage and injury. In female MMA, for example, you can find yourself watching a fighter who is essentially (in hormonal terms) male, beat up a woman. It often makes for uncomfortable viewing. It’s bad for the sport, and most of all it’s bad for the fighters. It sends the message that following the rules is penalized by getting your face smashed in. 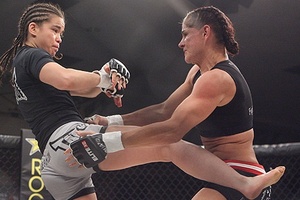 Nobody doubts that those fighters who use illegal substances still have to work hard. To be amongst the best in the world, that’s essential. But there are physiological limits to what can be achieved with hard work alone. At the top levels, where most fighters are already working close to their maximum training capacity, and everyone has solid technique, the added advantage that performance enhancing drugs can give is significant and in some cases insurmountable.

For fighters, then, there’s a huge incentive to exploit any loopholes. You might not want to cheat to gain an advantage over your opponents, but at the same time you don’t want to be at a disadvantage if “everyone else is doing it”.

Tougher penalties alone won’t do. The testing procedures used in MMA are (on the whole) outdated enough that fighters are confident that with a little knowledge they can avoid getting caught. Occasionally, a fighter is careless or unlucky enough to test positive and receives a fine and a ban as a token sacrifice to the gods of public opinion and sporting legitimacy. Meanwhile, other fighters breathe a sigh of relief that on this occasion it wasn’t them. Everything carries on as normal.

This approach isn’t working. So what’s the answer?

We have a choice to make. We can decide that we want steroids out of the sport. In that case, athletic commissions, governing bodies, promotions alike need to work together to implement gold standard drug policies. The World Anti-Doping Agency work with sporting organizations and produce model rules and protocols for testing. As a minimum, off season random testing of fighters is essential. It might never be possible to get rid of performance enhancing drugs entirely, but it’s possible to tighten the net and change the balance between risk and reward in favour of the clean athlete. Some of the athletic commissions are starting to move towards stricter testing, but much more still needs to be done.

Or, we can decide that all this is too much trouble. The point is often made that MMA is more a business than a sport, and it’s true that many casual fans are more concerned about seeing exciting fights than what the athletes are taking before they get into the cage.

If this is the route we want to go down then we should change the rules and allow athletes to use these drugs freely, without the stigma of “cheating” attached. Of course there are risks and side effects – but we could at least have an honest, grown up discussion about the medical issues, without the hypocrisy that surrounds the subject at the moment. Athletes could make an informed decision to balance the risks of the drugs against the risks of being the one not taking them. Neither set of risks should be underestimated.

As a fighter I’ve never used steroids, and I don’t want to start now. Of the two options, I’d prefer to see an improved standard of testing. But the important thing for the sport and everyone involved in it, is that we come clean about it one way or the other.