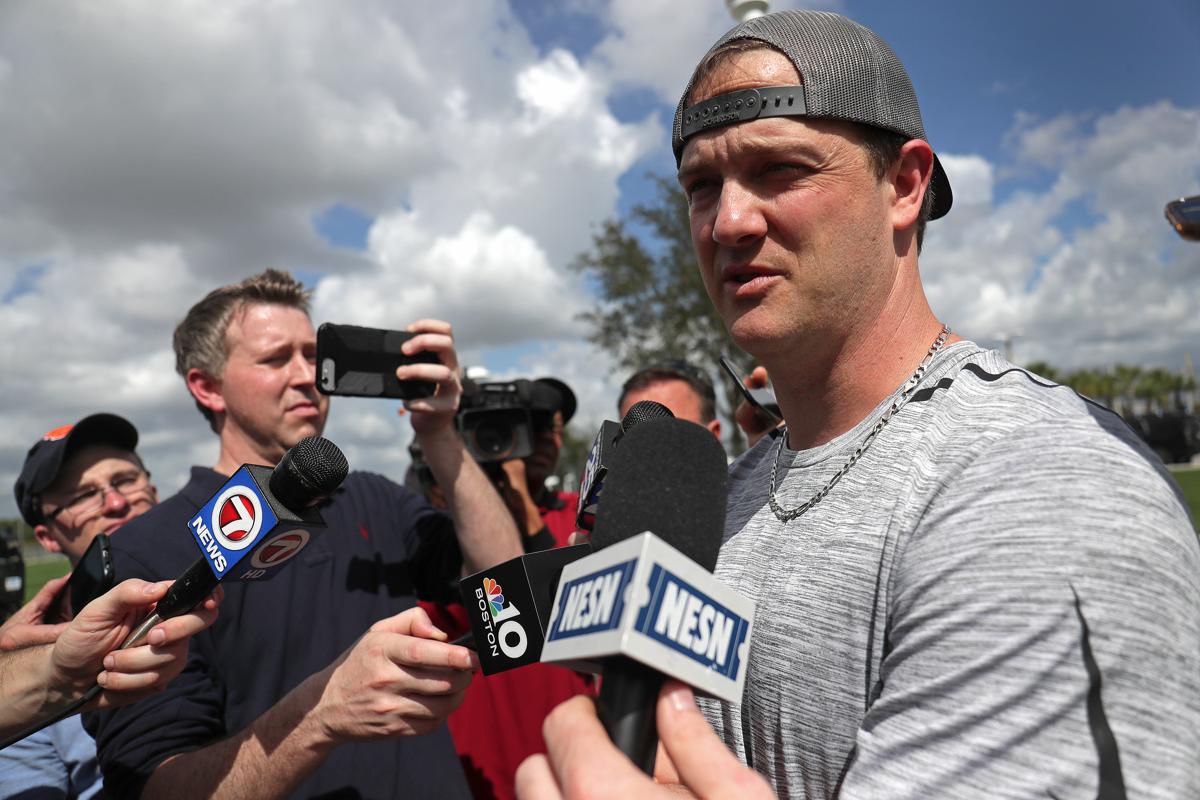 Red Sox pitcher Steven Wright was suspended for 80 games after testing positive for a performance-enhancing substance.

We interrupt the serenity of Red Sox spring training to bring you a dose of PED reality, courtesy of Major League Baseball. It fired a fastball through Fort Myers, Fla., this past week and nailed knuckleballing reliever Steven Wright with an 80-game suspension.

Wright did his best to perpetuate the fantasy bubble, though, when he offered the same-old, same-old excuse for his mistake, one we’ve heard enough times and from enough athletes to wonder if they live in a fantasy world.

“Although I do not dispute the validity of the test, I was shocked as I have never intentionally ingested anything for performance-enhancing purposes,” Wright said in a statement upon release of the news. “I have fully cooperated with MLB and will continue to try and identify the source of the result.”

Wright maintained that position while meeting later with reporters in Florida. In explaining that the positive test from this past offseason was not announced until now because of an appeal filed on his behalf by the MLB Players Association, he also insisted its investigation could not determine the source of the drug identified as GHRP-2, a synthetic peptide that stimulates the secretion of human growth hormone.
“I know for a fact it was not from the doctors. Somehow it got in there,” Wright said. “It was such low levels that it could have come from anywhere . . . Not one time in my mind did I ever think this would be possible because I feel like I’m pretty careful. But I guess I’m not careful enough.”

Translation? I have no idea how it got there.

Interpretation? Here’s hoping people believe me, that my intentions were never to cheat, and that if I stick to this position long enough and consistently enough, they will eventually forget and move on.

Conclusion? We’ve heard it enough. And not simply because it’s so ridiculous to believe that so many of the most finely tuned athletes in the country are that unaware of what is going into their bodies. Of course they know. What’s worse is the culture this kind of denial represents and what kind of message it sends — that deflecting knowledge somehow absolves transgression. That is a dangerous idea to perpetuate.

“As any athlete or any human being, we are responsible for what goes into our body,” Don Hooton Jr. said in a telephone conversation between meetings for his work with the Taylor Hooton Foundation, a nonprofit organization leading the national campaign to educate youth and their adult influencers about the dangers of appearance and performance-enhancing drugs. Named for Don’s late brother Taylor, whose death at age 17 by suicide was linked to his use of steroids, the foundation has established a strong relationship with MLB. It has many MLB players on its advisory board (including Red Sox Dustin Pedroia and Chris Sale) who are also on their “All Me League,” comprised of athletes who promise to compete PED free.

“These guys are role models and the message this sort of story sends to kids is that I need to use these drugs to make it to the top,” Hooton said. “That’s certainly not the case. We’ve worked with MLB for many years and because of our partnership, because of their support, together we have influenced millions of young lives and their adult influencers.”

Denials such as Wright’s send the wrong message.

“Certainly it’s saddening, it’s disheartening,” Hooton said. “Obviously, the biggest thing is it’s concerning. These are still human beings outside of the sport. We know the damage these drugs can do to the body. I’ve obviously lived it losing my brother, but damage it does to the heart, to the other organs. That’s where it gets concerning, being concerned for their health.”

Patriots wide receiver Julian Edelman was suspended for the first four games of the 2018 season for PED use.

It’s the message we heard only last summer from Patriots wide receiver Julian Edelman, who was suspended for the first four games of the regular season after testing positive for an unidentified performance-enhancing drug. “I am very sorry,” Edelman wrote on Instagram. “I don’t know what happened. I’ve taken many, many tests obviously over the course of my career, and nothing like this has ever happened.”

We’ve heard it over the years from Alex Rodriguez, an admitted steroid user who tried to make us believe he had no idea what his cousin was giving him, but infamously said, “I knew what we were taking weren’t Tic Tacs,” or from David Ortiz, whose path of plausible deniability went straight down ignorance road. When informed by reporters he was on the 2003 list of baseball players to have tested positive for PEDs (a list that was intended only to determine if there was a need for further testing and punishment, was meant to remain anonymous, and which drew no punishments), Ortiz was quoted by ESPN as saying this: “The news blindsided me . . . Based on the way I have lived my life, I am surprised to learn I tested positive.” We heard it from Barry Bonds, whose professed ignorance was based on an assumption his personal trainer was giving him approved substances.

We heard it recently at the NFL Combine, when Clemson standout defensive lineman Dexter Lawrence continued to insist he didn’t know how a substance called ostarine got him banned from his team’s bowl game. “I don’t know where it came from, how it got there,” Lawrence said during the season. “I was raised different. If I did do it, I’d own up to it, but all I can say is I honestly don’t know what happened or how it got in. It’s just there. There’s nothing I can really do about it.”

We heard it this spring from Royals pitcher Eric Skoglund, like Wright banned for 80 games and stripped of postseason eligibility.

“We have no idea,” Skoglund told reporters. “Something got into my body without me knowing. It was scary. It just kind of makes you think what could it have been. That’s the hardest part, not knowing. Because I’m not a guy that’s going to cheat the game. I didn’t do anything maliciously. It’s not the type of person I am. It’s not my character. It’s not how I was raised, so it sucks and we couldn’t find anything. That’s what’s going to eat at me for the rest of my career.”