ANKARA, Turkey — American basketball star Diana Taurasi had her contract terminated by Turkish club Fenerbahce on Thursday after her “B” sample tested positive for doping.

The Istanbul-based club made its decision after the Turkish Basketball Federation announced the results of the doping test on its website. Taurasi faces a ban of up to two years, putting in jeopardy her chances of playing for the United States at the 2012 London Olympics. 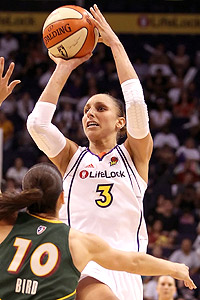 Christian Petersen/Getty ImagesDiana Taurasi’s days of playing for Turkish club Fenerbahce are over, and doubt has been cast on her chances of playing for the United States in the 2012 Games.

The federation has not announced a decision on Taurasi’s punishment.