David Paulino recently received an 80-game suspension for violating the Major League Baseball’s Joint Drug Prevention and Treatment Program. He tested positive for the anabolic steroid boldenone, an alleged PED in the game of baseball. He will also be ineligible to play in the postseason, which the Astros are all but certain to make. At the time of this writing, the Astros are 56-27, have a 14.5-game lead in the AL West, and have a 99.9 percent chance of winning the division.

Paulino ranked 83rd in Baseball Prospectus’s top 101 prospects for 2017, and has seen only a little action in the majors. He debuted last year and made only one start and two relief appearances for a total of 7 IP, giving up four runs while walking three and striking out only two. This season he made six starts and struggled badly. He has a 6.52 RA9 and averaged less than five innings per start. He did have very good strikeout and walk rates, but when he got hit, he got hit hard. A .354 BABIP is not too unlucky when you have a 40.5 percent hard-hit rate.

The good news for fans of the Astros is that Baseball Prospectus projects Paulino to be a number three or number four in the starting rotation. When he comes back next year, if he has continued to progress as expected, he should be a respectable starter. 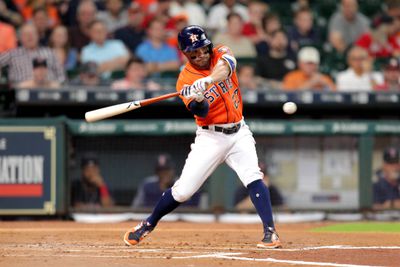 The Astros second baseman is striking out way more. It could be nothing, or it could be something.

The thing about taking boldenone is that it does not just make a player fail a drug test. It also means he failed an IQ test. Mets fans might be the most familiar with boldenone because it is part of Jenrry Mejía’s claim to fame (or rather, to infamy). His second and third failed drug tests were from boldenone, and that last one led to a lifetime suspension. Abraham Almonte also received an 80-game suspension last year for taking boldenone. At the time of his suspension, he was a below-average hitter for his career.

Boldenone has been around for almost 70 years. In fact, with the exception of steroids developed at BALCO such as THG, any anabolic steroid you hear about in a failed test has been around for 50 years or more. That is why the belief that baseball players discovered them all of the sudden in the late ‘90s strains credulity.

Being around so long also means that the scientific community has had plenty of time to develop tests that can easily detect boldenone. Furthermore, it can be detected for months after a person has stopped taking it. Anecdotally, I have read about people who tested positive for it as many as 18 months after discontinuation. That is what I meant about the IQ test comment. A baseball player taking this substance in a sport that might have the strictest testing in the world either does not know what he is doing, or is not very bright.

Let’s get into the nitty-gritty of the chemistry here. I understand that not everybody remembers Lewis structures from high school chemistry, and even less people understand organic chemists’ shorthand for drawing molecules. I will do my best to present the material in a manner that everyone can understand.

Boldenone is very similar to testosterone. In fact, most anabolic steroids are. As you can see below, boldenone is just testosterone with an extra double bond.

That extra double bond is a small change, but as any medicinal chemist will tell you, a small change can have big effects. In this case, it decreases the molecule’s affinity to bind with an enzyme called estrogen synthase, which can convert the molecule into estrogen. This allows boldenone to retain the same anabolic properties as testosterone but with a lower incidence of estrogenic and androgenic side effects. As far as I know, one cannot obtain boldenone as the parent compound because it is sold as the undecylenate ester.

That long carbon chain attached to what once was the hydroxy group functions as a way to prolong boldenone’s half-life and release rate. The ester of boldenone is inactive, but the body has enzymes that can cleave that oxygen-carbon bond. But that takes time, which is why the drug can stick around for longer. When a drug is installed with a metabolically labile but pharmacologically inactive substituent designed to be cleaved in the body, that is called a prodrug. This strategy is sometimes used when a drug has pharmacokinetic or solubility problems when used as is.

The whole idea behind boldenone was to develop a long acting version of dianabol, also known as methandrostenolone. It has a half-life of only eight hours. Boldenone has a half-life of 14 days. Again, there are reports that it can be detected for up to a year and a half after discontinuation.

Boldenone undecylenate does have legitimate uses, though not in humans. It is a veterinary drug used primarily in horses. There is no government that I am aware of that has approved boldenone for any use in humans.

There are better anabolic steroids out there for bulking up, but boldenone is still effective at building lean muscle mass. That is useful for baseball players because it introduces the possibility of gaining strength without looking like the Hulk, which would obviously raise suspicion. Furthermore, remember what I said about the long half-life? That allows for slow and steady muscle gain, so there will not be any spikes in strength that could raise suspicion.

Boldenone would be great for baseball players if it were not for the facts that a) it is against the rules, b) it is easily detectable, and most importantly, c) it shares the same dangerous side effects as other anabolic steroids. In addition to those side effects, it can make users voraciously hungry, and more dangerously, it can stimulate the release of erythropoietin more than other anabolic steroids. Erythropoietin is better known as EPO, and it is well known in the cycling community. Stimulating it is great for anemic people, but not so much for those who are healthy. The increased production of red blood cells can lead to higher blood pressure and risk of heart attack.

One more important note: It is possible that Paulino was taking something that was far more difficult to detect that happened to be tainted with boldenone. This can happen when a drug is purchased on the black market. The glassware used in the synthesis is not always cleaned well in between reactions. Sometimes an acid wash is necessary to remove any trace amounts of steroids.

It is a shame that Paulino exercised such poor judgement. To be clear, I do not mean that he tainted the sanctity of the game, or any other vapid statements to that effect. The bad decision was to take an easily detectable steroid that has questionable baseball benefits but unquestionable health risks. Because of boldenone’s slow-acting nature, any velocity enhancing effects could have taken a long time to manifest, if at all. The Astros are deep, but now they are down one pitcher who could have been useful for the rest of the year.