Another prominent fighter for Strikeforce has been accused of taking a banned substance.

A urine sample provided by light-heavyweight Muhammed “King Mo” Lawal for his Jan. 7 fight in Las Vegas showed the presence of the anabolic steroid drostanlone, the Nevada Athletic Commission said Tuesday. Lawal defeated Lorenz Larkin via technical knockout in the second round, but the official result will be changed to a no-contest. 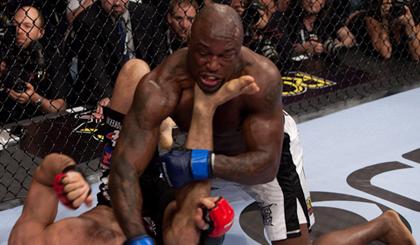 The matter has been referred to the state attorney general’s office, according to Keith Kizer, executive director of the athletic commission. Penalties vary based on individual cases, but the most common sanctions in the past involved a nine-to-12 month suspension and a fine ranging from 30% to 50% of the fighter’s purse, Kizer said.

Formerly the champion of Strikeforce’s 205-pound division, Lawal was in line for a shot at regaining the belt following his dominance of the previously unbeaten Larkin. After Tuesday’s news broke, Lawal denied trying to cheat with steroids, according toMMAjunkie.comÂ andÂ ESPN.com.

All fighters provide “A” and “B” urine samples during the screening process for bouts in the United States. Lawal will ask that his “B” sample be tested by another lab, said his manager, Mike Kogan.

“Both of us are very surprised by these results,” Kogan told USA TODAY. “Neither of us has ever heard of this drug. … We honestly have no clue where this came from.”

Other than food and drink, the only substances that Lawal takes on a regular basis are iron supplements, Kogan said. When Lawal had fluid drained from his knee a few weeks before the bout, he did receive an injection of a non-anabolic steroid, Kogan said.

Tuesday’s news marks the second consecutive Strikeforce show in which a fighter tested positive for a banned substance.

Women’s 145-pound champion Cristiane “Cyborg” Santos ingested stanozolol for a Dec. 17 fight in San Diego. The California State Athletic Commission fined her $2,500 and suspended her for a year; Strikeforce parent Zuffa planned to strip her of the title. SantosÂ blamed the incident on a supplementÂ she took to make weight for the bout against Hiroko Yamanaka.

Shortly after Nevada announced Lawal’s test result, Zuffa on Tuesday announced a new policy of testing all fighters for performance-enhancing drugs before signing contracts with them.