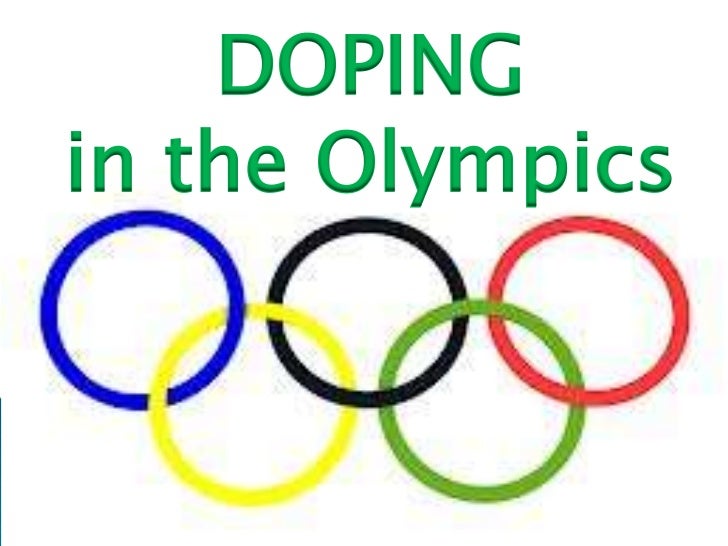 RIO 2016! It’s a showcase for the triumph of the human spirit, opportunity for the world’s top athletes to have all the sex, and a possible looming health disaster of epic proportions. High jump over here for all of Thrillist’s coverage of the games, and the games beyond the games.

The Olympics is a magical event when a lifetime of hard work gets put on worldwide display, athletes become heroes, and thousands of young people in their physical prime succumb to the aphrodisiac atmosphere of Olympic Village. While competitors from all over the world gather to catch Zika and wade through the literal sewage plant that is Rio de Janeiro, there’s another shit-storm the International Olympic Committee (IOC) is actually prepared for: juiced-up jocks.

More than 100 Russian athletes have already been banned from competing, thanks to that little state-sponsored doping scandal, and the IOC doesn’t seem to be messing around. “The IOC may require any athlete over whom it has testing authority to provide a sample at any time and at any place,” its official anti-doping guide for Riostates, which means it could theoretically roll up on Ryan Lochte while he’s shooting HGH into his veins on the side of a sick ski slope in mid-December and ask him to pee into a cup. Jeaaahhhhhh! The idea is to make it harder to hide the use of performance-enhancing drugs, even during training.

The IOC works with the World Anti-Doping Agency (WADA), which created a list of all the banned substances and methods, effective as of January 2016. Some of these prohibited drugs are common sense — it’s pretty hard to look like Arnold Schwarzenegger circa 1975 without the help of anabolic steroids — while others are a little more puzzling. Why is alcohol only banned for archery? Are athletes still allowed to take meth in their downtime? And what the hell is gene doping, other than a key plot point in Christopher Nolan’s next film?

Here are all the banned substances and methods, explained:

Drugs banned at all times

Probably the biggest no-brainer on this list is the use of anabolic steroids; it’s how the cast of Jersey Shore was able to drink copious amounts of alcohol and still maintain giant biceps and six-pack abs. Technically termed “anabolic agents” in the WADA guide, steroids are the synthetic form of the male hormone testosterone, and can help you get jacked. Quick.

“Steroids increase muscle mass, strength, endurance, recovery time, and they essentially signal growth in muscle, and growth in everything that feeds energy,” says David M. Ferguson, PhD, and professor of medicinal chemistry at the University of Minnesota. “You can watch someone struggle to bench press 200lbs, and [in] two or three weeks they’re benching 400lbs, and it’s all from the anabolic steroids… everything just goes to excess on steroids.”

Athletes usually cycle on and off of them, especially during training when steroid use is the most beneficial for athletic gains. While they can be tested for them at any time, it’s not uncommon for athletes to stop taking steroids a few weeks before competition and still test clean. Not that anyone would ever do that…

Human growth hormones (HGH) are usually mentioned along with steroids, and can increase muscle mass, bone density, strength, and even aid in recovery. But unlike steroids, which yield results pretty quickly, HGH must be taken over longer periods of time to reap the rewards, and aren’t as common among Olympic athletes. Same with hormone and metabolic modulators, which are more rare but are used to help treat the side effects of using anabolic steroids, and can mess with hormone production.

Beta-2 agonists are lifesavers for athletes with asthma. Literally. When inhaled, they help dilate the blood vessels and relax the muscles surrounding the lungs, allowing them to breathe. They’re allowed by the WADA, so long as the athlete has an approved therapeutic use exception (TUE) for them. But they won’t do a non-asthmatic athlete much good in terms of performance anyway; beta-2s only have performance benefits when they’re taken orally or injected, Dr. Ferguson says, and both forms are banned.

On the testing side of things, diuretics and other masking agents totally mess with the urine samples, which is kind of the point, but also why they’re called out by the WADA. There’s no other reason for healthy Olympic athletes to have a diuretic in their systems other than to dilute their pee.

Methods banned at all times

In addition to substances, some shady athletes (*cough* Lance Armstrong) have been known to use performance-enhancing methods, which are also major no-nos. Blood doping is the biggest one, which refers to gaining a larger than normal red blood cell count to help carry oxygen to the lungs and muscles to help with endurance. One way to blood-dope is by injecting synthetic oxygen carriers (such as HBOCs or PFCs), or erythropoietin (EPO), a hormone that’s naturally produced by your kidneys to stimulate red blood cell production.

Because tests for EPO have been commonplace since the 2000 Olympics in Sydney, and a test for synthetic oxygen carriers was implemented in 2004, some athletes moved to the old-school method of blood transfusions. This is done one of two ways: drawing your own blood and storing it to use for later, or getting a blood transfusion from someone else who has the same blood type, both of which increase red blood cell count. Tampering with said blood-dope tests and blood samples, aka “chemical and physical manipulation,” is also explicitly banned.

The WADA also prohibits gene doping, which isn’t really a thing — yet. Genetic modification is still in the studying phase for disease treatment, but experts envision a world where athletes are literally running around with an entirely new genetic makeup.

“Genes control the function of muscle cells, blood-producing tissues, and the ways in which our bodies utilize energy, and we know that many of those genes can be manipulated,” Professor Theodore Friedmore, chair of WADA’s Gene Doping Expert Group, told Play True magazine. “The advances in methods to introduce new genes to cure are more or less identical to the methods that might be imagined for sport enhancement. That fact makes the likelihood of attempts at gene doping pretty high.”

The WADA wants to get ahead of this (incredibly expensive and impractical) problem before it starts. It’s continuing to develop tests that detect gene doping, just in case some rogue team has access to a secret genetic lab ahead of the Games.

Drugs banned in competition only

Look, off the field (or track or gym or pool), some athletes like to have a good time. Whether or not that fun is legal/good PR is another matter. Just ask Michael Phelps. But as far as the WADA is concerned, certain drugs are totally fine any other time except for performances.

Most of these are popular street drugs, including stimulants (cocaine, meth), narcotics (heroin, methadone, oxycodone), and cannabis (marijuana, weed, reefer, Mary Jane). Not that smoking weed would be particularly helpful for someone looking to run a marathon or swim 400 meters, but taking a stimulant delivers a quick burst of energy that would be beneficial to someone like a sprinter.

Glucocorticoids, on the other hand, are powerful anti-inflammatories, and may be prescribed for something like a slipped disc or to treat an autoimmune disease. They’re also a form of steroids that produce energy when taken, and are therefore banned during competition. But they carry severe health side effects — glucocorticoids weaken the immune system, making people prone to serious infection, and they raise blood sugar, which is why they are only prescribed for a few days at a time. Other potential problems include psychological effects such as mood changes and memory problems, and the onset of Cushing syndrome.

Alcohol will probably make you a worse athlete overall, but it;s not explicitly banned by the IOC, except in archery. Wielding a bow and arrow is no joke, and alcohol impairs judgment, so the Olympics are probably just trying to prevent a Rambo-style situationfrom happening.

Only a handful of events ban beta blockers, which slow down heart rate and relax muscles, because they can be particularly helpful for fine motor control. Fun fact: beta blockers are also popular among orchestra performers for this reason, if you can imagine a group of classical musicians involved in an underground drug ring.

They also calm down the intense adrenaline that comes before such a major competition, and can help tame flinching and twitching. “[Taking beta blockers] reduces your adrenaline, so it counters adrenaline effects. When you go into competition, you get pretty pumped up, even if you’re an archer,” Dr. Ferguson says. “If you have something that reduces that pump-up, relaxes your muscles, and lowers your heart rate, it’s like taking a deep breath.”

The IOC knows that where there’s high-stakes performances, there will be drug use. Within these broad categories, the WADA has outlined hundreds of specific substances and methods that are explicitly banned, and are strict about in- and out-of-competition testing. Russia may be the biggest example of a large-scale doping scandal right now, but it’s far from the only athletic team to utilize these illegal practices. It’s impossible to monitor every athlete at every moment, and when competitors have their entire country banking on their team’s athletic prowess, they’re bound to seek an edge.

“John Q. Public doesn’t recognize the fact of how easy it is to cheat. That’s the scary thing,” Dr. Ferguson says. “It’s really horrible if you think about it. But the gains are tremendous.”