Alistair Overeem isn't going to be April's Zuffa Employee of the Month, a bitterly angry UFC president Dana White joked on Wednesday, only an hour after the heavyweight contender failed a random drug screen ordered last month by the Nevada Athletic Commission.

But if any good comes of Overeem's testosterone-to-epitestosterone ratio testing well above normal limits, it would be that it may spur the UFC to take a serious look at bolstering its drug program. Overeem's T/E ratio was greater than 10-1, well above the 6-1 ratio that is the cutoff for positive tests in Nevada, said Keith Kizer, commission executive director. 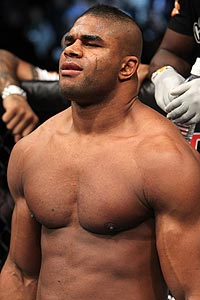 Alistair Overeem failed a drug test, leaving his scheduled May 26 bout with Junior dos Santos in doubt.
The World Anti-Doping Agency and the United States Anti-Doping Agency considers anything above a 4-1 T/E ratio a positive. Kizer said that Quest Diagnostics, the lab that processed Overeem's test, reported to the commission that his ratio exceeded 10-1. "I'm trying to get the exact number [from Quest], but all we have so far is that it exceeded 10-1," Kizer said. Kizer selected all six heavyweight fighters, including Overeem, for random testing for performance-enhancing drugs following a March 27 news conference at the MGM Grand in Las Vegas. The other five - heavyweight champion Junior dos Santos, who was to meet Overeem; Cain Velasquez, Frank Mir, Roy Nelson and Antonio Silva - all passed their tests, Kizer said. Overeem is not licensed in Nevada and thus is not subject to punishment. But if he chooses to try to go ahead with the May 26 bout against dos Santos in what was planned to be the main event of UFC 146, he'd be forced to appear before the commission to explain his abnormally high T/E ratio. He almost certainly would not be granted a license unless he was able to demonstrate a flaw in the testing or adequately explain why his ratios were so elevated. Nevada would send Overeem's "B" sample to any accredited laboratory of his choosing for testing, if he so wishes, Kizer said. As for the fight, White said he hasn't made up his mind what to do, so the dos Santos-Overeem bout is not officially off yet. The cancellation, though, appears to be just a matter of time. While Overeem's result puts a damper on perhaps the UFC's biggest show of the year, one in which its main card was, for the first time, going to include five heavyweight matches, the bigger issue is the UFC's response. Fighters under contract to Zuffa, the company that owns the UFC, and Forza, which owns Strikeforce, are failing steroids tests far too frequently. On the same day that Kizer tested Overeem, Strikeforce cut light heavyweight Muhammed Lawal as a result of a failed steroids test from January. White insisted at the news conference that day that Zuffa and Forza fighters are the most-tested athletes in the world and not much more could be done. In January, UFC owner Lorenzo Fertitta announced that all UFC and Strikeforce fighters signing with the company from that point forward would be required to pass a pre-contract drug screening. "We've got 375 guys under contract," White told Yahoo! Sports on March 27. "We're doing a zillion fights a year. We're traveling all over the world, and all these other things we're doing. Now, do you really think we can really crack [expletive] down and chase these guys around everywhere they live, all over the world, and just randomly test these guys all the time? On top of all the other things we're doing? "You really have to sit back and think and use a little bit of reality." It's a difficult task, no doubt. And, to be honest, steroid use is never going to be completely stopped. The money has gotten large enough that some athletes will assume the risk and cheat in an attempt to win. Mixed martial arts fighters are no different than football players, baseball players and basketball players. They push their bodies to perform beyond normal levels. Most of them do it legally, but there are some who skirt the rules. Whether Overeem is one of the cheaters remains to be seen. He failed to respond to an email seeking comment and his publicist, Jennifer Wenk of Authentic Sports Management, declined comment. White was extraordinarily angry at Overeem and accused the Dutchman, who stopped Brock Lesnar in the first round at UFC 141 in December, of lying to him. "We have to have a rapport with these guys," White told Yahoo! Sports Wednesday. "We're not the police, we're not the commission, we're not their mothers or their fathers. If you do something stupid, at least be honest with us so we can help you deal with it and fix it. "He lied straight to our faces. That has me so [expletive] angry, I can't even tell you. He said to us, 'The last thing you have to worry about is me popping. I'm the most-tested athlete in the world.' Yeah, [expletive] right." 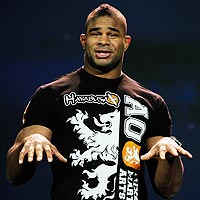 Overeem is coming off a win against Brock Lesnar at UFC 141 in December.
The solution is one that White has resisted embracing. It's to implement a comprehensive policy that includes random unannounced testing on each fighter at least twice a year run by an accredited agency. Dr. Margaret Goodman, a Las Vegas neurologist and the former chairwoman of the medical advisory board of the Nevada Athletic Commission, founded a company called the Voluntary Anti-Doping Association. She said a program that would test all of the fighters under contract to White and Fertitta twice a year would cost between $1 million and $1.5 million a year. Goodman acknowledged it is an expensive proposition, but noted that it's the cost of guaranteeing a clean sport. The doomsday scenario for the UFC would be for a fighter to be seriously injured or killed in a fight and for it to turn out that the opponent had been artificially enhanced by steroids. Were that to occur, the billion-dollar empire that White and Fertitta have worked more than a decade to build would be at serious risk. "Hey, it's got to be more cost effective than having a big fight like this that they were advertising and that a lot of people would buy and now they don't have that fight," Goodman said. "What are the expenses of that, besides looking at the actual health issues. I think it would probably even out. "Their [fighters] would probably be healthier, because if it wasn't so easy for them to use performance-enhancing drugs, there probably wouldn't be as many injuries as they're getting. Obviously, on the minor scale of what testosterone use can do is cause tendon injuries and predispose them to all kinds of bone and joint problems. I'm not saying that's why these guys are getting hurt, but you take that factor out and you make it a lot less likely." Overeem's T/E ratio came in under the 6-1 limit in previous testing done by Nevada, Kizer said. Goodman said she found it "quite interesting" that Overeem's test included an elevated T/E ratio but did not show a positive for an anabolic steroid. She said she suspects many athletes are avoiding steroids and are just using testosterone to boost their training. "Athletes more and more are turning to using old-fashioned testosterone," Goodman said. "It's what they can get their hands on, it works just as well, it's got a short half-life and it will be out of their system quite quickly, so it's not just the T/E ratio. Obviously, testosterone itself can cause a whole bunch of problems, ranging up to the realm of liver cancer. The actual ratio probably isn't the real issue at this point. "And some people will argue that there are normal, healthy people, depending upon their ethnicity, who can wander around with higher T/E ratios."

There are a number of variables, and it's a problem that likely will never be solved 100 percent. But in order to try to put a dent in it - it's likely that, through the use of masking agents, as well as cycling on and off, that the ratio of users is higher than the number of reported positive tests - the only solution is random, unannounced testing.

White was over-the-top angry at Overeem. But, perhaps, if this is the incident that ultimately leads Zuffa to the formation of a serious, comprehensive policy regarding performance-enhancing drugs, White may one day come to remember it fondly.   If you're a parent or educator looking for information on these dangerous and illegal drugs, learn how to talk to kids about steroids.Â  A life is too precious to lose, especially toÂ superficial ideals. We created the Taylor Hooton Foundation to ensure no more lives were lost because of steroid abuse. If you need help educated your young people, please contact us.